My wife and I just bought a house. As part of the move, I decided to give our daughter’s room a more interesting paint job. We finally agreed on a Penrose tiling in purple and pink. It turned out rather well, if I do say so myself: 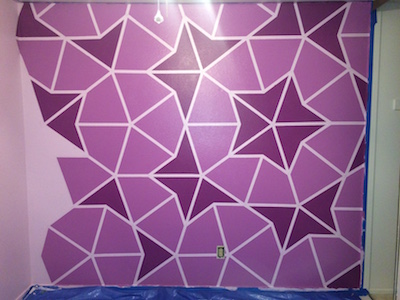 To be somewhat more specific, the design is a piece of a Penrose “kites and darts” tiling. The tiling contains only two elements: the “kites” (convex quadrilaterals, in the lighter purple), and “darts” (the concave quadrilaterals, in the darker purple). Using only these two shapes, the entire two-dimensional plane can be covered, or “tiled.” However, unlike tilings with squares or equilateral triangles, which can be shifted and rotated without changing the pattern, this tiling has the property that it cannot be translated or rotated. While large patches of the pattern repeat infinitely often, there is no way to move the tiles in a rigid way such that the pattern matches up. For the interested reader, the Wikipedia article on Penrose tilings is informative. There is also a really nice discussion at Plus Magazine.

This entry was posted in Art and tagged art, mathematics. Bookmark the permalink.