A large portion of the “standard” precalculus curriculum consists of a rather tedious recitation of trigonometric identities. I am largely of the opinion that there are only a couple that one really needs to know—for example, the Pythagorean identity (\(\sin(\theta)^2 + \cos(\theta)^2 = 1\) for all \(\theta\)), one of the angle addition formulæ (e.g. \(\cos(\theta+\varphi) = \cos(\theta)\cos(\varphi) – \sin(\theta)\sin(\varphi)\) for all \(\theta,\varphi\)), and the law of cosines (essentially the Pythagorean theorem with a correction term) immediately come to mind as important results. In the last quarter, while teaching precalculus class, I was introduced to a couple of proofs that I had not seen before. I don’t get the impression that either proof is that unusual or original, but I do think that they are both rather slick. I’m putting them up here for future reference.

Proof: It is possible to obtain angle addition formulæ for both sines and cosines with one picture. The argument is as follows: first, we need to angles to add together, say \(\alpha\) and \(\beta\). We are going to draw them so that \(\alpha\), \(\beta\), and \(\alpha+\beta\) all live in quadrant I, though the argument can be generalized to other quadrants without too much additional work (exercise: do this). 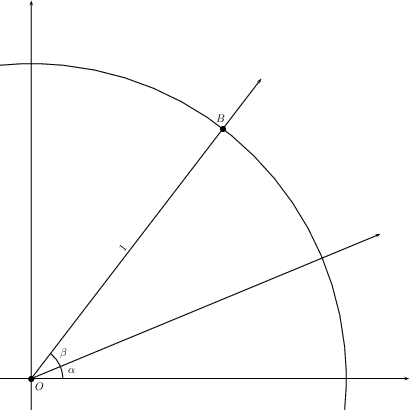 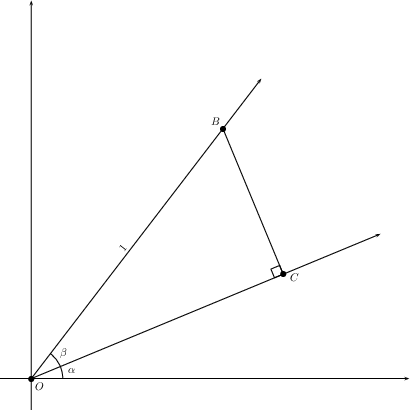 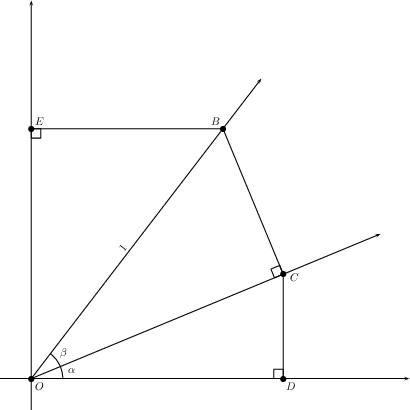 We finish the figure by extending the segments \(EB\) and \(DC\) until they intersect at a point \(F\). Note that we now have a rectangle \(ODFE\). 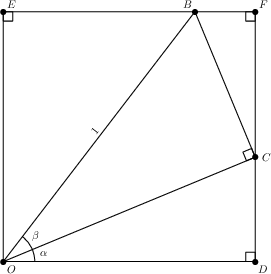 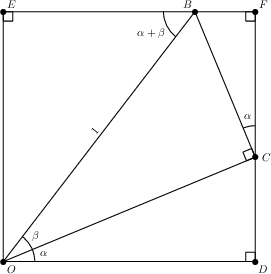 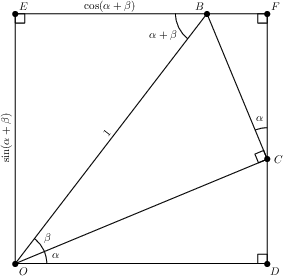 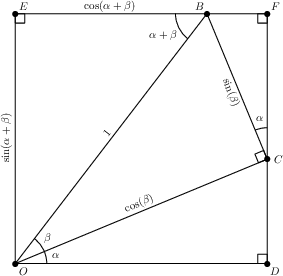 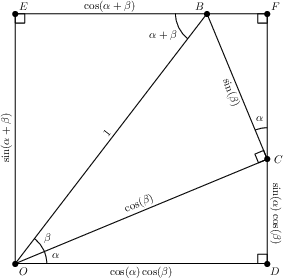 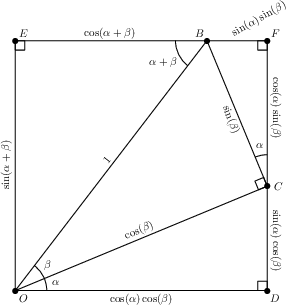 Proof: We may assume that the triangle is oriented such that \(\theta\) is at the origin and one of the two “legs” is along the \(x\)-axis in the Cartesian plane. Labeling the vertices such that vertex \(A\) is opposite the side with length \(a\), \(B\) is opposite \(b\), and \(C\) is opposite \(c\), we obtain the figure shown below.

⬛
This entry was posted in Education and tagged education, trigonometry. Bookmark the permalink.