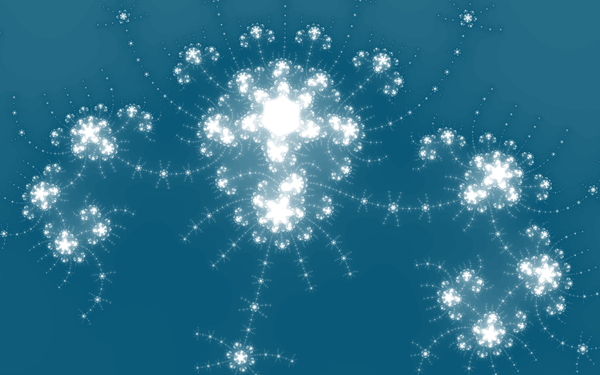 Last week was spring break. While I was still in the office most of the week, I had no classes to attend, or to teach, so I actually managed to get a little work done. I also managed to put the above image together.

I am generally fascinated by multibrot sets of odd degree, particular the degree seven multibrot (a portion of which is pictured above). As noted before, odd degree multibrot sets have an even number of “spokes,” and have a very nice rotational symmetry. The seventh degree multibrot reminds me of a snowflake, which may be part of the attraction—snowflakes are rather nifty in and of themselves.

While playing around in my favorite of multibrot sets, I came across what I thought was a rather striking image. Near the edge of the multibrot, I found several minibrots with long tendrils reaching out into the void. The image seemed somehow alien, in much the same way that jellyfish or microscopic organisms seem alien. There is a delicate structure that appears to be driven by some ineffable will. After some manipulation of the palette, I was able to bring this structure out, and produce the above image.