My wife is an editor for the literary site Indie Ink. The goal of the site is to foster creativity in a non-judgemental and non-competitive manner. One way in which they do this is through a weekly writing challenge, where authors write in response to prompts given by other authors. Every once in a while, when I have some free time, I sign up to play. This happens to be one of those weeks. 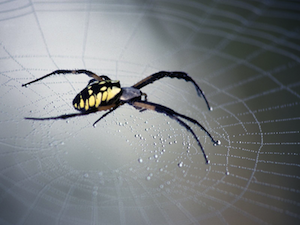 The cool autumnal breeze pulses gently, and moonlight shimmers on the rolling waves of corn. The weaver sits on the spent tassel and bides her time, feeling the currents, relying upon instinct alone to guide her. The night air stills… then moves again. In that moment, the weaver casts her line. A thin strand of sticky silk glistens as it slowly drifts through the dark, carried by wind across the void.

The tentative filament reaches its destination, and holds fast. The weaver quickly secures her end of the line in motions that have been honed and practiced through eons of trial and error, then dances nimbly across the bridge of silk to ensure that the far end is firmly in place. The first thread is in place, forming a loose catenary which rocks invisibly above the ground.

The weaver scurries to the center, her weight drawing the slack tight and distorting the smooth curve of silk into a V. She ties a new thread to the old and slowly lowers herself to the ground, spinning and swaying in the breeze as she descends. Upon reaching the moist earth, she searches briefly until she finds a strong point, and anchors her line.

Uncomfortable on the ground and with much work still to be done, the weaver climbs back up the narrow thread to the center of her nascent web, then out to the tassel where she began. She secures another line, then scurries across the chasm, this time pulling the silk taut when she reaches the other side, creating a new, higher bridge.

With a basic scaffold more or less complete, the real work can begin. The weaver ties yet another strand to the center of the structure, then climbs back out to the edge and ties it down, thus building a new route from core to periphery. She deftly moves back and forth from the heart to the edge, constructing radius after radius, until dozens of spokes extend from the union of the first two strands. Even at the very edge of the web, the threads are close enough that the weaver may step from one to the next, giving her the ability to travel anywhere in the network without visiting the center.

Of course, the weaver’s intent goes beyond merely moving from place to place—the tapestry is to have a much more sinister purpose. Beginning on the edge, the weaver anchors a strand of sticky silk, then carefully spins it out to the next spoke of the web. She deliberately steps from radius to radius, spooling out the tacky thread and attaching it as she goes. Even the weaver is careful not to handle this entangling twine more than necessary for fear of becoming trapped in her own net.

Before too much time has passed, the weaver has circumnavigated her web, forming a near circle of gummy silk. The shape is incomplete, as the ends do not meet—the weaver has, in the course of her trip around the web, moved inward a small distance. This is by design. Rather than cutting the long ribbon, the weaver continues to step from strand to strand, laying down more and more of the gooey thread, spiraling slowly but inevitably to the center.

The spiral, described by Archimedes two thousand years ago, but known to the weavers for uncountable millennia, is a perfect instrument. The sticky strands are close enough to trap even the smallest prey, yet there is still more than enough space for the weaver to walk in safety along the radii. Once finished, more than one little creature is likely to meet its doom along the graceful arc.

However, upon tying down the long, sticky string at the center, the weaver is still not satisfied. Stepping gingerly out along a few of the first threads, she wanders into the web. Led by some unknown desire, she finds a particular spot, and begins to spin out a dense structure of silk, zigging and zagging across the spiral back towards the center. Thick lines of silk slowly take shape, clearly illuminated by the moonlight. She repeats this process once more, drawing out another crooked line on the other side of the web.

She pauses. Plucks a string. Tests the stability of the web. Darts here and there looking for any imperfection. Eventually, she is satisfied that the structure is sound and fit for purpose. Content, she settles into the heart of the web…

This entry was posted in Writing and tagged IIWC. Bookmark the permalink.