If you have made it as far as algebra, you have encountered many kinds of numbers. You probably started by learning about natural numbers in kindergarten, although you probably called them whole numbers or counting numbers. At some point, you learned about fractions. Fractions are not whole numbers, but belong to a larger class of numbers called rational numbers [1]. A little while later, probably while talking about the measurements of various geometrical figures, you learned about irrational numbers. Things like \(\sqrt{2}\) and \(\pi\), which cannot be represented by a terminating, non-repeating decimal. You also almost certainly learned about the integers, which consist of positive and negative whole numbers, and zero.

In general, each class of numbers serves to answer a question that other classes of numbers cannot completely answer. For instance, rational numbers are useful for dividing objects into discrete pieces (which can’t be done with whole numbers alone), and negative numbers are useful for balancing a checkbook (which cannot be done with positive numbers alone). Imaginary numbers turn out to be the solutions to a certain kind of equation. Specifically, imaginary numbers are required in order to solve equations like \(x^2+1=0\).

In the above equation, we would normally solve by subtracting one from each side, then taking the square root. This gives us \(x^2=-1\Rightarrow x=\sqrt{-1}\). Just as we cannot discuss what happens when we divide an apple into two pieces using only whole numbers, we cannot adequately solve the above equation using only real numbers [2]. There is no real number that, when squared, gives us \(-1\).

We can add and subtract imaginary numbers just like we add and subtract real numbers. For instance, \(3i+2i=5i\). However, multiplication works a bit differently. As \(i\cdot i\) is defined to be \(-1\), the product of two imaginary numbers is going to be a real number. For example, \(4i\cdot 3i = (4\cdot 3)(i\cdot i) = 12\cdot (-1) = -12\). This should strike us as a little unintuitive, as we are used to multiplying two numbers on the number line and getting another number on the number line. 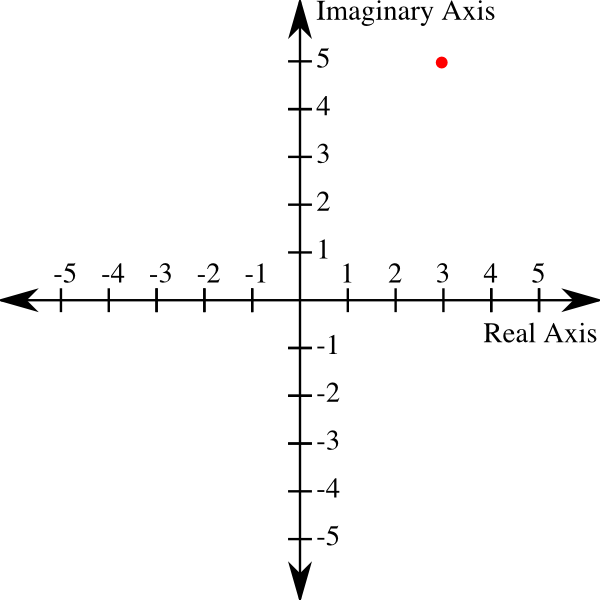 Of course, now that we have complex numbers, we need a way of working with them. That is, we need to define how basic operations work. In order to work with the Mandelbrot set, we are going to need multiplication and addition, so let’s define those two operations.

There is a fair bit of notation in the box below, and if it gets to be too much, feel free to skip it. However, I think that it is worthwhile to read through it, and try to come to terms with it.

The long and short of it is that complex numbers can be added and multiplied (and, by extension, subtracted and divided) just like any other number. Addition is very straight-forward, but multiplication requires just a little bit of work.

In the course of mathematics, it was discovered that certain kinds of equations did not have solutions within the set of numbers that mathematicians were used to dealing with. To solve these equations, mathematicians had to invent imaginary numbers, which could be thought of as the square roots of negative numbers.

Perhaps most important to our discussion of the Mandelbrot set, complex numbers can be graphically represented as points on a plane. A point’s horizontal position relative to the origin (i.e. the zero point) represents its real component, while its vertical position relative to the origin represents its imaginary component. As we move forward, this graphical representation of complex numbers will be significant.

[1]
Rational refers to the fact that the numbers can be expressed as a ratio of natural numbers. Think rational. It has nothing to do with the numbers being insane or unreasonable, or anything like that. ↩
[2]
The real numbers are a class of numbers containing all of the rational and irrational numbers. All of the integers are contained within the rational numbers, and all of the whole numbers are integers. This means that the real numbers account for practically all of the numbers that we encounter in our day-to-day lives. ↩
[3]
In many American schools, a simplified version of this rule, called FOIL (first, outside, inside, last) is used for polynomials of the kind seen here ↩