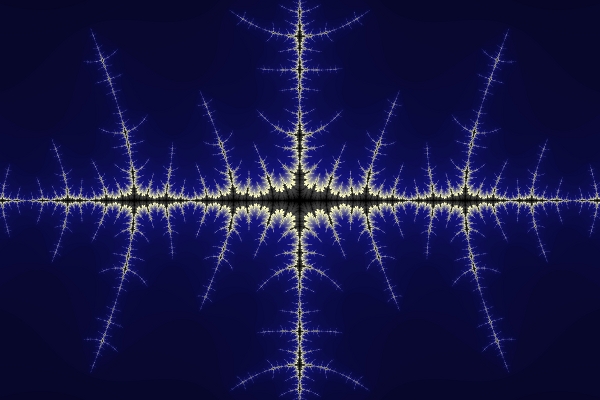 As always, a larger image can be found by clicking on the above. The original is about 2.4 MB, and shows a larger region of the pictured fractal.

Julia sets display a rotational symmetry. That is, if you printed out a copy of a Julia set, then pinned the origin to the center of an old LP, you could spin the record 180 degrees, and the rotated image would align with the original image. The set of Julia sets also has an interesting symmetrical property—Julia sets generated with constants that are complex conjugates[ref]Recall that complex numbers have a real component a, and an “imaginary” component b. We might write complex numbers as \(a+bi\). The conjugate of a complex number \(a+bi\) is \(a-bi\).[/ref] will be reflections of each other. For instance, consider these two rabbits: 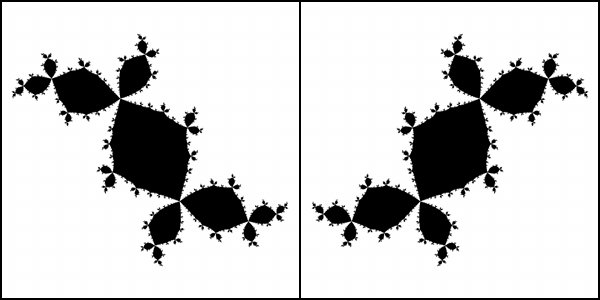 However, if we generate a Julia set using a real number (i.e. a number without an imaginary component), the image will be not only rotationally symmetrical, but also have reflective symmetry. This is the kind of symmetry that most elementary school students are introduced to—the images could be cut in half, and the two halves would match up. Julia sets with real constants are symmetrical both horizontally and vertically, which is an interesting property for a figure to have.

The image at the top was generated using the constant \(-1.4012\). The towers of a fractal city rise into the night, and are reflected in the lake below.