Three points are randomly chosen along perimeter of a square. What is the probability that the center of the square will be contained within the triangle formed by these three points?

I would like to present my own thinking on the problem, but before I even get started, two important points. First, I wrote all of the following discussion as I solved the problem—the goal was as much to display the thought process and see if there was an “Aha!” moment (as Vennebush describes). Second, I am not even certain that the final result is correct, or that the logic is sound. I think it is, but I eagerly await Vennebush’s solution, that I might compare it to my own.

The first thing that I did was try to get a handle on what kinds of configurations of points will create triangles containing the center of the square. I drew several squares, and put points on the perimeter, and tried to note when the triangle formed by those points contained the center.

After a few minutes, I concluded that there were basically four cases:

My thinking was as follows: I started by placing a point X on the square at random. Ultimately, I only care about where the other points fall relative to X, so it doesn’t really matter which side of the square X lands on. To make life easy for myself, I put X at the bottom, with the understanding that if X fell somewhere else, I could just rotate the square to get it to the bottom.

Once X is placed on the bottom, the two remaining points could fall on the bottom (b) side, the top (t) side, the left (l) side, or the right (r) side, each with equal probability. Hence there are 10 possible different configurations, each of which is equally likely: bb, bt, bl, br, tt, tl, tr, ll, lr, and rr.

The next step was to figure out the probability of cases A and B creating triangles that contained the center of the square. I started with case A.

When I first saw this purple segment, a lightbulb when off in my head. I had a little “Aha!” moment. The four cases I had discovered earlier were utterly irrelevant. Once I plopped down two points, I could draw segments through the center of the square, and define a region where the third point needed to fall. It didn’t matter where the first two points were, or how they were configured.

It turns out that if I already have points X and Y, the probability of point Z landing in the purple zone is the “city-block” distance[ref]There are a lot of ways of the measuring distance between two points. The two that are most familiar to us are “as the crow flies,” which connects two points with a straight line and measures the length of that line; and “city-block” distance, which requires that we travel along a square grid, like the roads in a city. In this case, we are measuring the distance from X to Y along the perimeter of a square, so we use city-block distance.[/ref] between X and Y divided by the perimeter of the square.[ref]There is one exception: if X and Y are can be joined by a segment that passes through the center of the square, i.e. they are opposite each other, then wherever Z is placed, the resulting triangle will contain the center of the square. However, this happens with probability 0, so we can safely ignore this possibility.[/ref] To make things easy, I assumed that the perimeter of the square was 1 unit, so the probability of Z falling where I wanted it was just the distance between X and Y.

That’s all well and good, but how far apart are X and Y, and with what probability? I needed to step back a bit, so I asked what would happen if X were fixed. Then the city-block distance between X and Y would be determined by the random position of Y. Y could happen to fall right on X, giving a distance of 0; it could fall exactly opposite X, giving a distance of 0.5 (I was still assuming a perimeter of 1); or it could fall on any other point between with uniform likelihood.[ref]By “uniform likelihood,” I mean that every possible point is equally likely, meaning that any distance between 0 and 0.5 (exclusive) is equally likely.[/ref]

This presented a bit of a problem for me, because it has been a while since my last probability class, and I wasn’t quite sure how to handle the continuous distribution of distances. However, I had another thought: “What if I discretized the problem? Instead of dealing with continuous distribution of possible locations for Y, why don’t I try to figure out what happens when I assume that Y can only fall on a finite number of points?” The model looks something like this: 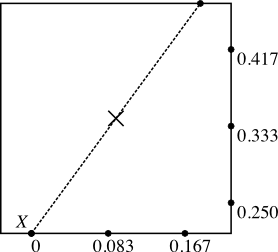 In this image, I have assumed that Y falls on one of 5 points which are equally spaced between X and the point opposite X on the square. Each of the points is labeled with its distance from X. Also note that each of the labeled points has a corresponding point on the other side of X, but that this doesn’t actually change the calculations at all.

A more general formula is given by

Basically, this says that if I have n points, then the distance between any two consecutive points is going to be 0.5/(n+1) units. Hence the distance from X to the ith point will be (0.5/(n+1))i units. As there are n points, I added up the probabilities for each point, then divided by n to find the average. If that isn’t very clear, I’m sorry—I can’t claim that it is entirely clear in my head.

At any rate, I am ultimately concerned with points falling on a continuum, rather than on a discrete set of points. Hence I am going to have to take the limit of the above formula as the number of points goes to infinity. That is, I need to find

Initially, I thought that this looked a bit like a Riemann sum, where the term 0.5/(n+1) looked a bit like a Δxi term. This implies that the problem could probably be approached from the standpoint of integral calculus. I started warming up my calculus muscles, but then I noticed that there was some simplification that could be done:

From having worked with sums a fair bit in my life, I recognize the sum in the right-hand term: it is the sum of the first n consecutive integers. From memory, I recalled that this is equal to n(n+1)/2. Had I not remembered that identity, I probably would have gone back to Reimann sums. Thank goodness I didn’t have to. Anyway, this means that

This number—0.25 or 1/4—is the solution that I propose for the problem. That is, if three points are selected at random along the perimeter of a square, then with probability 1/4, that triangle will contain the center of the square.

This entry was posted in Probability and tagged probability, problems. Bookmark the permalink.

5 Responses to Squares and Triangles