After I finished my bachelor’s degree, I celebrated by getting a tattoo. 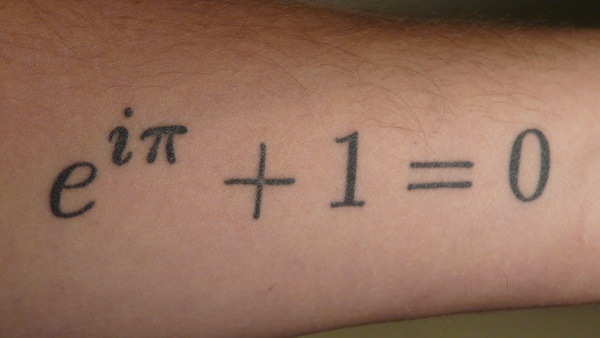 It is reasonable to ask a person with a tattoo what the significance of their tattoo is. What is that on my arm, and why did I choose to put it there?

The easy answer is that the completion of my bachelor’s degree was a long, hard process with several false starts and dead ends. Completing that degree was a major milestone in my life, and I wanted a way to memorialize the event. As I majored in mathematics, it seemed logical to put mathematics onto my body. While this is all true, people seem to really want to know what the equation means.

This equation is known as Euler’s identity.[ref]”Euler” is pronounced [ɔʏlɐ]—it sounds like “oiler.”[/ref] The equation inspires a certain awe from mathematicians—it unifies some of the most basic mathematical concepts in a pure, simple expression that contains no extra notation, no extra variables, and no extra constants. It is a result that is initially somewhat unexpected, though obvious in retrospect.

Many of the symbols in the identity are easily identified by anyone who managed to get through elementary school arithmetic, while others are a bit arcane. Euler’s identity contains five constants. These dramatis personæ are:

The number one is the most basic of all mathematical objects. Infants who are unable to speak can recognize the concept of one. Kindergartners are taught to count beginning with one. Students learning addition, multiplication, and exponentiation learn that one has some interesting and useful properties. In a sense, the number one is the foundation upon which all of mathematics is built.

Oddly enough, the number zero came into existence relatively late in human history. Most number systems had no concept of zero until perhaps the 6th century. Yet zero is an absolutely vital concept in mathematics.

As a symbol, 0 is useful in numeration, where the addition of zeros can indicate the differences between 1, 10, and 100. A number system where each digit represents an increasing value is incredibly useful (if you don’t believe me, try doing addition with Roman numerals), and a place-holding digit can prevent a great deal of confusion.

Beyond its utility as a symbol, zero is important in every field of mathematics, from basic arithmetic all the way through to the most specialized branches of abstract algebra, analysis, and theoretical statistics. Without zero, mathematics would be impossible. If one is at the foundation of mathematics, then zero is the bedrock upon which that foundation rests.

The Number π (a constant)

π is defined as the ratio between a circle’s circumference and its diameter. While this definition is very simple, π is both irrational and transcendental—it defies description in some pretty fundamental ways. Moreover, it turns out that π pops up everywhere. π is clearly related to the geometry of circles, but it also appears in trigonometry, where it is related to both circles and triangles. π also shows up in physics with some frequency: it is useful in describing angular momentum and the structure of waves. π even shows up in statistics as part of the definition of one of the most used and useful statistical tools—the Normal Distribution.

π also seems to have some popular resonance. A Google search for “pi” generates almost two hundred million results. π has been the subject of a movie, is often a topic for beginning programmers, and even has its own holiday.

In every way conceivable, π is a foundational constant in mathematics.

The Number e (a constant)

e is Euler’s constant, and is, perhaps, the first item on this list that will be unfamiliar to many readers. Like π, e is both irrational and transcendental, but it is defined not in terms of geometry, but in terms of derivatives and logarithms.

In calculus, we often ask how “steep” a curve is. The steepness of a curve is described by a value called slope, which describes how far up an ant crawling on that curve would have to travel for every step they take forward. We can find the slope of a curve at any point using techniques from calculus. It turns out that e is a kind of magical number—at any point \(x\) on the curve \(e^x\), the slope of the curve at that point is \(e^x\). If that didn’t make sense to you, don’t worry—the important thing is that when approach with the tools of calculus, the number e has some pretty unique properties.

Of course, that is not all there is to e. The number e is defined in terms of exponents. If you did well in high school mathematics, you might remember that exponents are related to logarithms. Early mathematicians found logarithms to be incredibly useful—they were a way of relating addition and multiplication to each other which vastly simplified the task of computing very large products. e is the base of natural logarithms, which are used when calculating interest in financial mathematics (among other things).

e may not have the celebrity status that π has, but it is one of the most important workhorses of mathematics. It makes appearances in many formulae, both theoretical and applied, and is used not just in pure mathematics, but in physics, biology, sociology, statistics, and cosmology, among other fields of study.

The Imaginary Number i (a constant)

i is the redheaded stepchild of mathematics. For centuries, mathematicians even refused to acknowledge that it existed. Even after they were forced to recognize its existence, they called it an “imaginary” number.

The imaginary number i is defined as the number that, when squared, gives us \(-1\). That is, \(i^2 = -1\). I have already spent some time discussing i, so I won’t go into too many details here. Basically, i doesn’t fit onto the standard number line, which is why its existence was so controversial. However, i is necessary for solving many problems in algebra, and has some interesting applications in understanding electricity, light waves, and quantum mechanics.

What makes this equation so stunning is how these five objects are related to each other. There are only three operations present in the equation: first, the constants i and π are multiplied. e is then taken to the power of that result. Finally, 1 is added to the whole mess. Yet, somehow, it turns out that this odd hodgepodge of constants can be bound together by these three simple operations, and the result is the final constant from our list—0.

Mathematicians tend to admire simplicity. In mathematics, simplicity, elegance, and beauty are often used synonymously. Euler’s identity is a single equation that links together some of the most fundamental objects in mathematics in a way that is simple, and therefore elegant and beautiful.

This entry was posted in Mathematics and tagged art, Meta. Bookmark the permalink.