The Mandelbrot Set—Part I: Fractals

Every Monday for the past several weeks, I have posted an image under the heading Monday Mandelbrot Madness. I have offered up these images largely on aesthetic grounds, and offered very little in the way of mathematical explanation. There are two reasons for this: I want readers to be able to appreciate the images on purely aesthetic grounds; and I have been planning a series of posts which explain the images in greater detail. This is the first such post.

The Mandelbrot set is a fractal. In this post, my intention is to introduce the reader to the concept of a fractal, and to provide a couple of examples. In future posts, I will spend some more time discussing the Mandelbrot set specifically.

So, what is a fractal?

While fractals are a diverse group of objects, they are defined, more or less, by self-similarity at all scales. While the actual definition is a bit technical, the basic idea is that if you have an image of a fractal, you can zoom in on that image, and find a smaller version of the original image. The smaller image need not be an exact replica of the original, but it should be pretty close.

If this is not entirely clear, let us consider the Koch snowflake. In order to create a Koch triangle, we begin with an equilateral triangle: 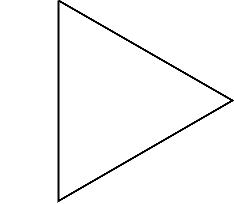 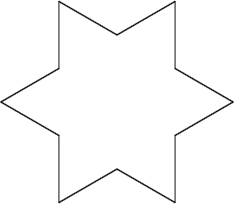 The above image is the 1st iteration of the Koch snowflake. The 2nd through 4th iterations are shown below.

For instance, consider a section of the snowflake, as depicted below. Then zoom in (i.e. enlarge just the rectangle highlighted in red—note that I have omitted a great deal of detail for the sake of clarity). The zoomed image is identical to the original image!

Hopefully, the Koch snowflake makes it clear what is meant by self-similarity at every scale—no matter how far we zoom in on any particular portion of the snowflake, we will still find more copies of the unzoomed portion (with allowances made for rotation). However, just to muddy the waters a bit, note that self-similarity need not necessarily indicate that the fractal is identical to itself at all levels. It just means that the structures seen at one scale are similar to the structures seen at another scale.

The obvious question to ask at this point is, “So what? Why are these things interesting?” Aside from the (hopefully) obviously pleasing aesthetics of fractals, they have some interesting mathematical properties which make fractals very difficult to study using standard geometrical techniques.

For instance, think back to your high school geometry class, or to your geometry instruction in lower grades. There are two measurements that you were probably asked to make for just about every figure you ever encountered: the perimeter, and the area. Just for the hell of it, why don’t we try computing the perimeter and area of the Koch snowflake. If you don’t care to see all of the gory details, just skip the box below.

Let’s put the pieces together: to get the perimeter, we multiply the number of sides and the length of each side. The perimeter of the \(n\)th iteration figure is then

The interesting result here is that the figure is bounded in area—after an infinite number of iterations, the entire figure will still fit into a little box—but has an infinite perimeter. This is really odd. It doesn’t make a lot of sense at first glance, and is one of the reasons that traditional geometrical techniques don’t work very well when trying to understand the Koch snowflake (and other fractals).

The Koch snowflake could be considered to represent a class of fractals consisting of polygons with finite area and infinite perimeter. There are several other classes of fractals, including space filling curves. An example of a space filling curve is the Hilbert curve (the first four iterations of which are shown below). 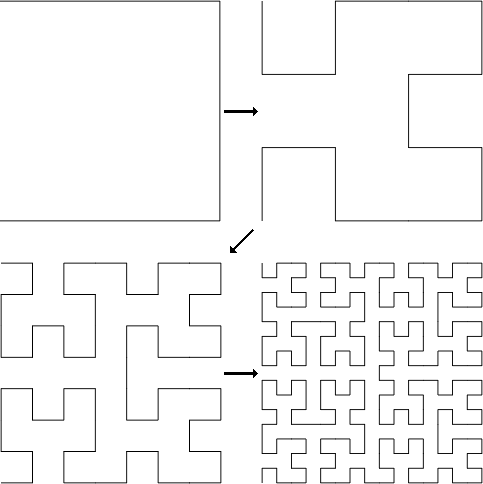 However, if you are very clever, you can fold the string back and forth on itself into a fractal pattern, and it will fill a square! This is an astonishing result. A curve is one-dimensional, yet somehow, it can be fleshed out to fill a square. This is, in a sense, a contradiction to the definitions of one- and two-dimensional objects.

Once again, we have a fractal that does something totally unexpected and contrary to intuition.

As stated above, fractals have many properties that make them difficult to analyze using traditional techniques. The Koch snowflake has an infinitely long boundary, while the Hilbert curve is a one-dimensional object which occupies a two-dimensional space. Both fractals are continuous at every point, which means that they could be drawn without ever lifting the pencil from the page. There are no gaps. However, neither fractal is differentiable at any point.

Differentiability is a measure of smoothness. Consider the following figure: 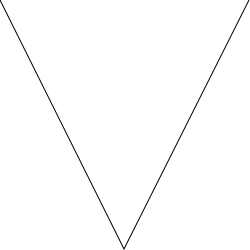 Don’t worry if you can’t wrap your head around that concept—it is not an easy thing to imagine and is actually basically impossible to visualize or accurately depict in an image. The important thing to understand is that there is a huge kit of tools that can be used to analyze and understand curves that are continuous and differentiable, but far fewer tools that can be used to understand curves that are continuous but not differentiable. Because these fractals are not differentiable at any point, they are hard to get a handle on. 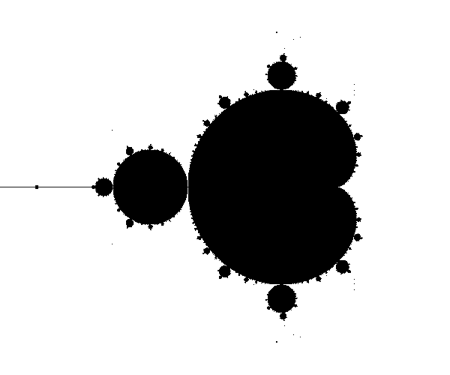 As we move forward into a discussion of the Mandelbrot set, there are a couple of important points to keep in mind. First, fractals are defined in terms of self-similarity. The Mandelbrot set is a fractal because it contains many of the same structures at any “zoom level.” More details can always be exposed by zooming deeper into the fractal, and those details will look much like the details at shallower levels of zoom.

Second, fractals are often generated using iterative processes that are carried through an infinite number of iterations. All of the figures above are simply approximations of processes that will, after an infinite number of steps, produce a fractal. None of the figures above are actually fractals—they are only simplified versions of infinitely more complicated figures that exist only in the abstract.

Finally, fractals are highly resistant to traditional means of analysis. While they can often be described relatively easily, discovering the properties of a fractal can be quite difficult.

[1]
To be mathematically correct, we repeat the process \(n\) times, where \(n\) is larger than any finite number \(N\). ↩
[2]
The math required to get this result is a little bit hoary, as it involves an infinite series. This is a level of mathematics that is likely to be a bit beyond the average high school graduate, and is thus a bit beyond the intended audience of this wp. However, if you are interested, Wolfram’s MathWorld has the details. ↩