My daughter has recently started playing with DUPLO blocks pretty consistently, which has me thinking about LEGO—the toy of my youth (and hopefully her’s in a couple of years, too!). In some ways, LEGO is an ideal medium for exploring fractals. They are relatively cheap and ubiquitous, forgiving of errors as they pop right apart, and have give a wonderfully tactile experience. I suspect that they might be a really interesting tool to use in the classroom, as well, but I haven’t really thought much about that yet.

When I was first struck with the idea of making fractals out of LEGO, I figured that a lot of people must have had a similar idea, and went out looking for examples on the internet. A quick search for “LEGO fractals” finds a couple of models, including a rather nice Menger sponge, but there seem to be surprisingly few such fractals made from LEGO. Moreover, most of the examples that I could find used techniques that I found displeasing, both aesthetically and mathematically—but before we get to that, we need a little background.

What is the Idea?

While there is no exact mathematical definition of what a fractal is,[1] they are often related to some kind of iterative process. For example, practical models of a Sierpinski triangle can be constructed from an equilateral triangle in at least two different ways.

In some sense, the first method is more mathematically accurate, as (in a technical and abstract manner) the object obtained by continuing the process indefinitely is the Sierpinski triangle. Moreover, an artist could start with an arbitrarily large block of material for the first iteration, and produce a finished work with details almost as small they like, assuming reasonable competence with their tools. From an aesthetic point of view, this is attractive. However, sculpting, folding, carving, or otherwise constructing a fractal in this way is somewhat limited, in that not all media are amenable to removing arbitrary pieces—wood or marble might work in the hands of a skilled artist, but LEGO (for instance) probably won’t work.

The second technique produces ever larger constructions as new iterations are added to the original construction, and the object produced after an indefinite number of iterations will have a very different kind of mathematical flavor from the fractal that it is meant to model. The cost of construction is also exponential with regard to the number iterations one wishes to display. On the other hand, the construction technique is relatively simple: produce a large number of “first iteration blocks,” then attach them to each other according to the appropriate algorithm.

As an example, consider the LEGO Sierpinski tetrahedron (a three-dimensional analog of the two-dimensional Sierpinski triangle) shown below. The construction is straight-forward: four 2×2 bricks are put together to form a lopsided pyramid with a roughly triangular base. Four of these models are then joined into a larger pyramid, and so on. Given enough 2×2 bricks, the model could be made quite large, though I suspect that it would eventually become too heave to support itself.

The goal is not just to build fractals using LEGO, but to do it in a manner that is both practical and mathematically robust. To that end, here are the rules (note that some of these are somewhat arbitrary, and depend on my own sense of aesthetics more than anything else):

A Practical Example with Instructions

My first model is an attempt to build a better Menger sponge. The basic module is picture below (color coded for your convenience), and a parts list and model file for the LEGO Digital Designer are available. 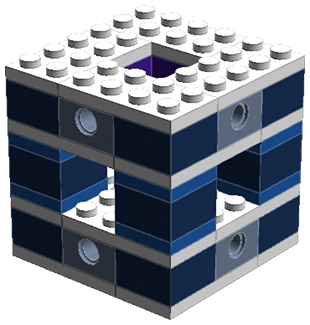 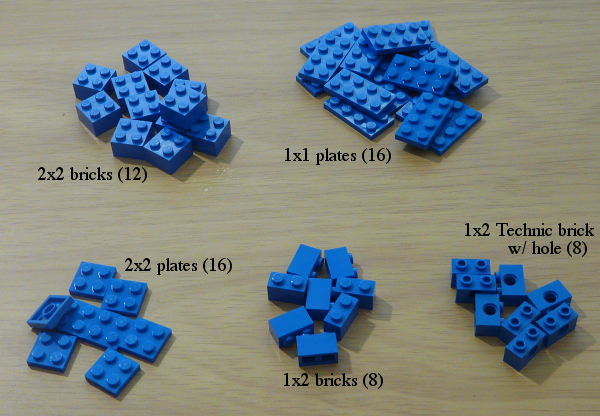 Start with a 2×4 plate. Stick a 2×2 brick to one side of the plate, and a 1×2 brick and 1×2 brick with a hole on the other side. Make a total of 8 of these, making sure that you place the hole consistently—when you put these guys together, they will all need to face out. My solution was to always place the 2×2 brick on the right, and the brick with a hole on the front left. 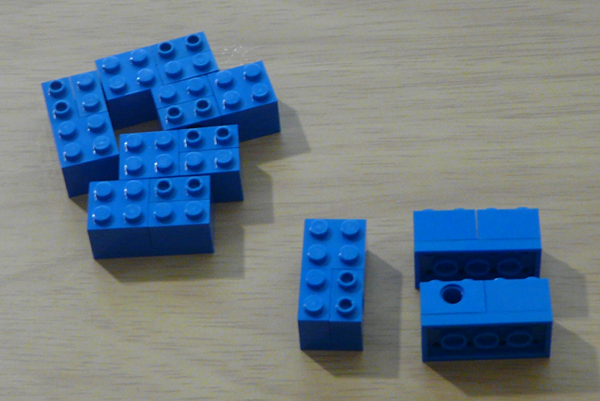 Arrange four of the constructions from the previous step into a square with a square space in the middle so that the holes in the 1×2 bricks are centered on each side and facing out. Use four more 2×4 plates to hold everything together. You’ll make 2 of these using the parts from step (2). 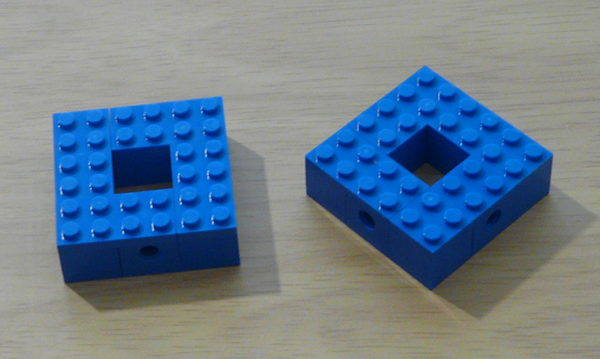 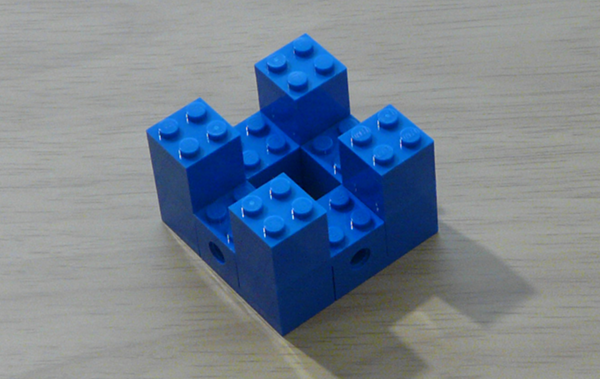 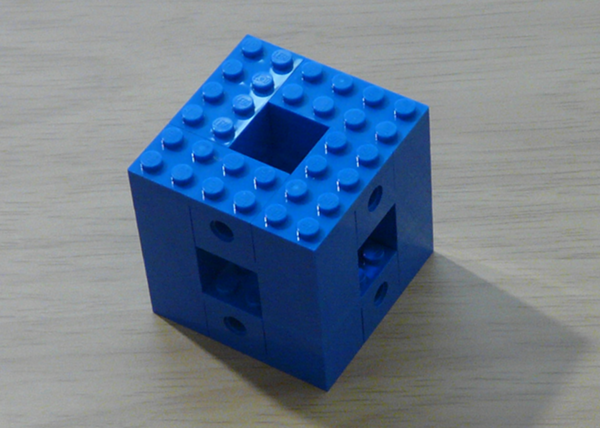 That’s it! The module is complete.

The above model represents the first iterate of the Menger sponge. To build the second iterate, you will need 32 friction pegs and 19 more copies of the the basic module shown above. The joining technique and a completed model are shown below. 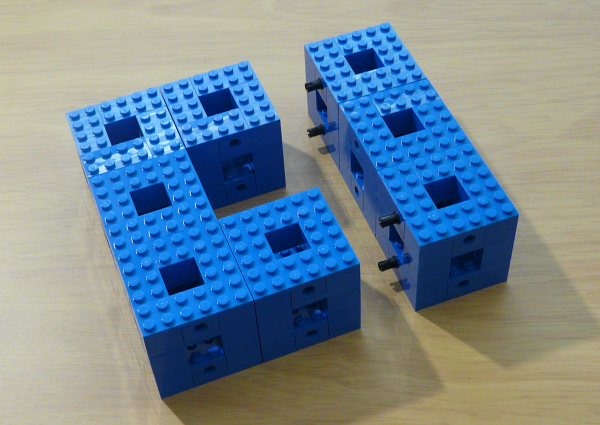 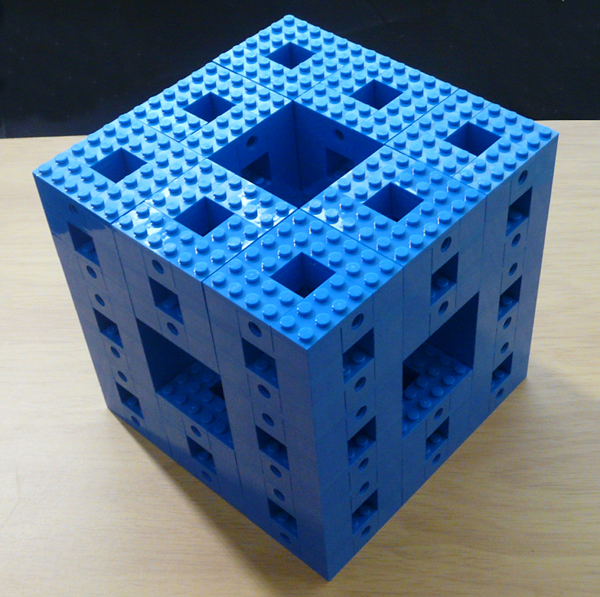 For those that are interested, I have designed some other fractal modules, but have not yet built any of them. LDD files for some complete ideas can be found in a .zip archive. I’ve had a few other ideas, but haven’t yet figured out how to put them together—if anything comes of them, I’ll make a note of it on this website somewhere. And if anyone bothers to build any of my designs, I would love to see them.

[1]
In reference to the definition of a fractal, Mandelbrot states that it might be wise to “…leave the term ‘fractal’ without a pedantic definition, to use ‘fractal dimension’ as a generic term…, and to use in each specific case whichever definition is the most appropriate.” (The fractal geometry of nature, W.H. Freeman and Company, New York, 1983, p 459) ↩
[2]
While the canonical Sierpinski triangle is equilateral, though the same technique could be applied to any triangle: bisect each side, remove the triangle formed by the midpoints, and iterate. ↩

This entry was posted in Fractals and tagged art, fractals, LEGO. Bookmark the permalink.