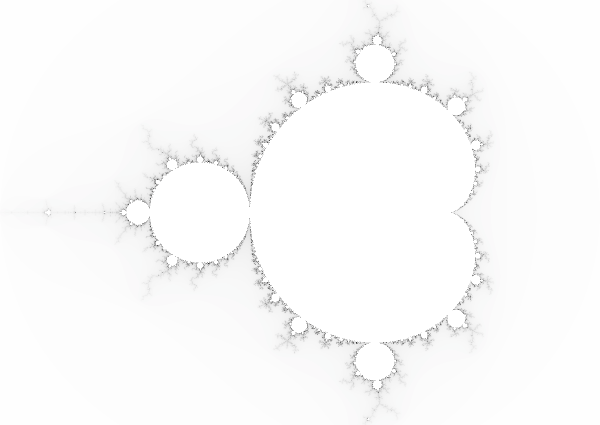 One of my favorite mathematical entities is a creature called the Mandelbrot set. Because of its complexity and the huge number of computations needed to compute or visualize the Mandelbrot set, it was not discovered until the late 20th century. The set was first visualized by Robert Brooks and Peter Matelski while they were working in a branch of abstract algebra. Starting in the late 1970s, Benoît Mandelbrot published some results regarding the set in relation to other research. Other mathematicians who worked with the set through the 1980s and ’90s named the set in his honor [1].

Since its discovery, images of the Mandelbrot set have made their way out of the mathematical ivory tower, and have appeared in popular culture—I have personally seen it on the covers of books (including, but not limited to, high school mathematics texts), on posters, in album art, printed on clothing, and in myriad other places. Clearly the images themselves speak to people.

In an effort to allow a lay audience to gain a deeper appreciation for images that they have almost certainly encountered, I have written several posts describing the Mandelbrot set. I would love for anyone with an interest in the Mandelbrot set to read through the series, so I have tried to make it easy to find by placing this page in a place where it is accessible from the front page.

For anyone who is interested, the source code for my fractal generating program is available. Please note that it is almost entirely undocumented, quirky as all hell, and likely riddled with bugs (off the top of my head, I can think of at least one fairly major bug in the way that bitmaps are read in as color palettes)—programming is not one of my strong suits, and the program has developed in a very piecemeal manner to provide me with the functionality that I require. I am happy to provide the parameter or color files used to generate any of the images on this website, assuming that I still have them. Feel free to send an email.

13 Responses to The Mandelbrot Set