Yesterday, my daughter and I made fig Leibnizes, which consist of a layer of fig paste between two layers of cakey-cookie substance (they’re like fig Newtons, only Newton was kind of a jerk, and there are no trademark issues). They turned out rather well, so I thought that I’d share the recipe here. 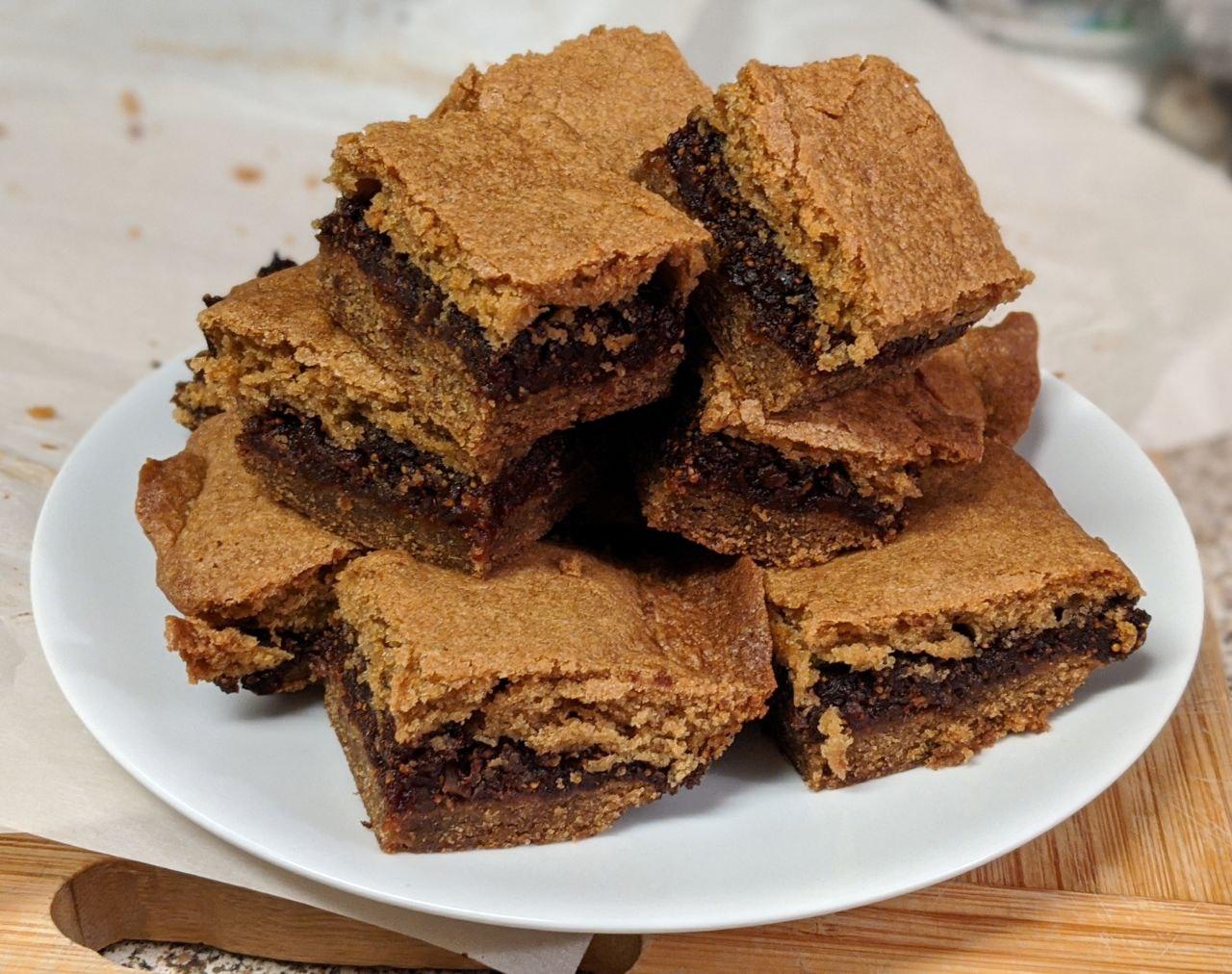 The recipe we used is based on this one from Dessert for Two, with several modifications to account for what I actually had in the cabinet, and for my daughter’s dietary restrictions.

Line an 8-inch square baking dish with greased parchment or foil. Make sure you have a rack in the middle position of the oven, and preheat it to 350°F.

Simmer the figs, water, salt, and date syrup in a saucepan, stirring occasionally, until most (but not all) of the water has cooked off and the figs are very soft. This should take about 30 minutes. Remove the figs from the heat and allow them to cool a bit (this is a good time to make the cake).

Add the lime juice and puree the fig mixture in a food processor until it forms a loose paste (or a thick jam). This shouldn’t take too long—maybe three or four 3 second pulses.

Whisk together the flour, baking powder, and salt in a medium sized bowl, and set aside.

In a large bowl, using an egg-beater (or a mixer with the paddle attachement), beat the butter and sugar until it is light and fluffy (this might take five or six minutes). Mix in the egg and vanilla.

Mix the dry ingredients into the butter and sugar mixture, stirring only to combine.[5] The resulting batter should be relatively thick, and should kind of hold its shape.

Put about half of the cake batter into the prepared baking dish, and press it into a layer of uniform thickness using a greased spatula. Bake just until the cake starts to darken—about 20 minutes. Remove this from the oven and let it cool for a few minutes.

Meanwhile, put the remaining batter between two greased sheets of parchment or waxed paper, and roll it into an 8-inch square (approximately). Put the batter-and-parchment sandwich onto a cookie sheet in the freezer.[6]

After the bottom layer of cake comes out of the oven and has cooled a little, spread the fig mixture over it in an even layer. Remove the remaining batter from the freezer, un-sandwich it form the parchment, and lay it on top of the fig mixture. Press it down a little to get it to stick. Feel free to take the extra bits from the edges to fill in the corners, or just kind of stick them on top (the whole assembly will flatten out a bit as it cooks).

Bake at 350°F until the top crust is golden brown—this should take about 30 minutes. It would be a good idea to rotate the pan about half-way through, particularly if your oven is known to heat unevenly.

Remove the dish from the oven and allow it to cool completely on a wire rack (or some other implement which allows airflow under the dish)—about two hours. Remove the fig Leibnizes from the dish using the parchment or foil, and cut into 16 2-inch squares (i.e. cut the original 8-inch square in half, then cut each of the resulting rectangles in half with parallel cuts; rotate the whole thing \(\frac{\pi}{4}\) radians (that’s 90°) and repeat). Eat.

[1]
The original recipe calls for Turkish or Calimyrna figs, but I have never seen anything other than black Mission figs at the store, so that’s what we used. ↩
[2]
We happen to have a jar of date syrup from China Ranch Date Farm in the fridge. This is a rather unusual ingredient, and I wouldn’t expect it to be easily obtained. The closest substitute I can think of is molasses. Honey could also work. ↩
[3]
The original recipe calls for 2 teaspoons of lemon juice. We didn’t have any lemons, and I think that one could go without entirely, but the hit of acid seemed necessary. I would think that apple cider vinegar would work, too. ↩
[4]
The original recipe uses both all-purpose and whole wheat flour. I think that this would be an improvement, but my daughter used up all of the whole wheat flour in the house at some point, and didn’t tell me, so we did without. ↩
[5]
The trick here is that beating the butter incorporates a lot of tiny little air bubbles into the mixture. This is the primary tool for giving “loft” to the cake, though the baking powder also helps. Over mixing the ingredients once the will drive out air bubbles, and will end up making the cake denser and less fluffy. ↩
[6]
This trick of freezing the top layer’s worth of batter is, frankly, genius. I wish I’d thought of it. ↩

This entry was posted in Silliness and tagged cookies, food, recipes. Bookmark the permalink.