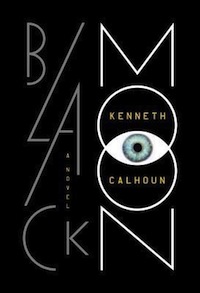 I finished my masters a little more than a year ago and am starting a Ph.D. in two months. In the intervening year, I have done a little research, some teaching, and made the (very) occasional post here. I have also been reading for fun(!) which is something that I haven’t done for quite a long time.

I am currently reading Kenneth Calhoun’s Black Moon. I haven’t really gotten that far into it (according to my Kobo thingy, I am 22% of the way through the book), but the book is (thus far) quite fantastic. The scenario is intriguing and the style and subject matter complement each other quite well. Assuming that it continues to be as good as it has been so far, I might put in the first or second slot of “Xander’s Best Reads of 2014” (obviously, the most important literary award of the year). Of course, the book could fall off the rails in the closing act, and I am generally not one to gush about a work before getting to the end, but I just encountered an amazing bit of prose / blank verse that I thought worth sharing.

For context, the premise of the book is that nearly everyone has lost the ability to sleep. The world is slowly crumbling, and noöne really knows why. An explanation is offered, perhaps from a mind addled by sleeplessness:

MAYBE it was food becoming a prop for food, the rise of corn and its many guises maybe it was the fluoride in the water maybe the author of us all decided to see what would happen maybe it was a distant comet dusting us with its tail of poisoned ice the moon was having its revenge someone uttering a combination of syllables that should never be uttered maybe it was the kids who weren’t given a chance maybe it was the fingerfucking of the priests the rise of autotune the piracy the orgy of infringement all the bad books and movies the shift to decentralization the emergence of collective intelligence the flattening of the world. Maybe it was the turtle on whose back we all live slowly shifting its feet the Sasquatch sending out vibes sharks swimming far upstream the game we inhabit had a glitch.

Maybe the angel’s horn had finally been blown.

UPDATE: I finished the book this afternoon. It is a remarkable work—definitely one of the (if not the) best books that I have read recently. Yes, the book is moody and depressing, but the construction of that mood is well-crafted and allows for a faint sliver of hope. I don’t really want to consider a full-on review of the book, but I would compare it favorably to the works of Stanisław Lem (the dream-like qualities of Solaris spring immediately to mind).

This entry was posted in Art and tagged books, Misc. Bookmark the permalink.